Johnny Depp might up picked up the Black Stump awards: Dill of the Year Award but I am giving Barnaby Joyce our genius “weird sweaty big-gutted man“ ( Johnny’s words not mine) the Communications Coup Wizard Award for 2015 for how he handled the Boo and Pistol smuggling case.

When they began The Archibull Prize only 38% of high school students (i.e. 123 of 327) had heard about biosecurity. Most of the Primary and High School teachers had (i.e. 86%, 30 of 35 teachers). Whilst 265 of the high school students offered an explanation for biosecurity, only 23 of these were acceptable; with 18 (of 35 teachers) explanations also being acceptable.

Awareness of biosecurity amongst High Schools students and their teachers on beginning The Archibull Prize, 2015

At the end of their projects the majority of high school students (94%, 197) reported having heard about biosecurity. All the students (100%, 207) chose the correct answer for the definition of biosecurity i.e. the protection of the economy, environment and community from the negative impacts of pests, diseases, weeds and contaminants. A majority of students (72%, 150) correctly identified biosecurity practices; and considered that biosecurity is everyone’s responsibility (85%, 178). A further 191 students offered their understandings of what ‘biosecurity is a shared responsibility’ means. These results are a significant shift in awareness of biosecurity as a result of participation in The Archibull Prize.

When Barnaby ordered his dog’s out and charged him with smuggling offences Johnny Depp continued to give biosecurity considerable oxygen and kept it front and centre by treating it as a joke by saying he had eaten his dogs. The court case will continue the good fight

BTW Hurlstone Agricultural High School took out both best class entry and best student entry in The Archibull Prize 2015. Going forward Hurlstone is putting biosecurity on the curriculum and making it an assessment task ensuring ‘Biosecurity” is a foreign concept no longer

Below are the winning entries

Not only was the Hon Niall Blair Minister Minister for NSW Primary Industries, Land and Water on hand to congratulate the students and teachers he also spoke about the The Archibull Prize Awards  and Exhibition Day in his speech to parliament on 17th November 2015.

You can read the full text in Hansard here

The Minister said of the Grand Champion

I am pleased to announce the 2015 winner of the prestigious Grand Champion Archibull award was Matraville Sports High School, from Chifley in the State’s east. Students should be proud of the work they achieved in their design of a fiberglass cow as a “cow-ch”, which is artistic and informative but acts as a functional seat. I will enjoy seeing this work in my office reception every day.

Recently I had the pleasure of having morning tea with last year’s winners and have hosted their award-winning bull in my foyer. I look forward to the opportunity to do the same for the 2015 winners. I recently hosted a parliamentary delegation from France. They took many photos of the bull and are aiming to roll out a similar program in France.

In 2016 students from Matraville Sports High School will visit the Minister’s office for morning tea. Where as you can imagine, the visit creates a huge buzz in the school.

SEE ALL THE PHOTOS FROM THE AWARDS CEREMONY HERE 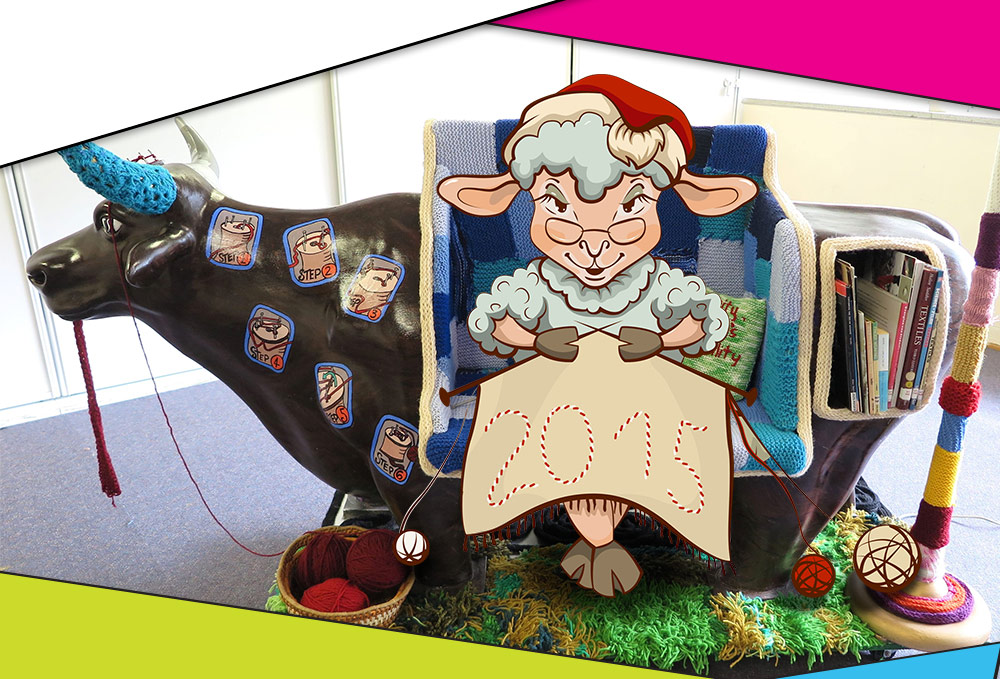 Wool – natural fibre showcase from the sheeps back to yours.

Beef – celebrating our regions food and fibre and the farmers and animals that produce it.